The Power of Hand Washing

The Power of Hand-Washing to Prevent Coronavirus

March 6, 2020 -- The single most important piece of advice health experts can give to help us stay safe from COVID-19 is this one: Wash your hands.

“In the final analysis, it’s the hands. The hands are the connecting piece,” says Elizabeth Scott, PhD. Scott co-directs the Center for Hygiene and Health in Home and Community at Simmons University in Boston. “You can’t necessarily control what you touch. You can’t control who else touched it. But you can look after your own hands,” she says.

Hand-washing -- with soap and water -- is a far more powerful weapon against germs than many of us realize. Scott says it works on two fronts: “The first thing that’s happening is that you’re physically removing things from your hands. At the same time, for certain agents, the soap will actually be busting open that agent, breaking it apart.”

How to Wash Your Hands 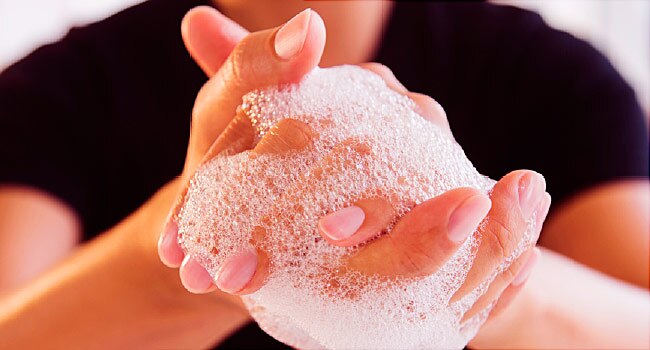 Scrub away! There’s a correct way to wash your hands and get rid of germs.
Coronaviruses, like this year’s version that has left 100,000+ worldwide infected with COVID-19, are encased in a lipid envelope -- basically, a layer of fat. Soap can break that fat apart and make the virus unable to infect you.

The second thing soap does is mechanical. It makes skin slippery so that with enough rubbing, we can pry germs off and rinse them away. Sounds pretty simple, but the vast majority of people still don’t do it right.

A 2013 study had trained observers discreetly watch more than 3,700 people wash their hands. It found that only about 5% of them followed all the rules. About one in four people just wet their hands without using soap -- a move hygiene researchers call the “splash and dash.” About one in 10 didn’t wash at all after a trip to the restroom. The most common shortcoming for most people was time. Only 5% spent more than 15 seconds washing, rubbing, and rinsing their hands.

Scott says that’s not good enough if you’re trying to keep from getting sick.
With a new virus on the loose, the stakes are higher now. It’s time to bring your technique up to speed.

How? Well, first turn on the water. It doesn’t matter if it’s hot or cold.

Second, lather up. The soap helps germs slip off your skin as you rub your hands together.
If you’re in control of the soap you’re using, you may want to pick a liquid or gel over foaming pump soap. A 2017 study that compared liquid and foam soaps from the same brand found that washing with foam didn’t significantly reduce bacteria on the hands of people who were in the study, while washing with a liquid soap did. The study was small and the first of its kind. Generally, scientists like to see research results repeated before they are accepted as fact. Study participants only washed for 6 seconds. Sadly, that’s about the average time most of us spend washing our hands -- but it’s less than the 20 seconds the CDC recommends. Still, study researchers think their results make sense. Because foam washes off more quickly than gel soap, users are more likely to splash and dash after a dollop of foam. “People tend to wash their hands for a shorter duration with the foam soap,” says Ozlem Equils, MD, president of an educational nonprofit called MiOra.

What about bar soap? Numerous studies have found that bacteria can stay on bar soap that stays wet because it gets used frequently. But studies that have looked to see whether that’s a problem show that the bacteria don’t seem to transfer to the next user. If your bar looks slimy, rinse it off under water before you lather your hands, and try to store it so it will dry out between uses.

What Happens When You Don't Wash Your Hands

If you’re in a public bathroom, and there’s no soap, just rubbing your hands together under the water does do some good. A 2011 study from researchers at the London School of Tropical Hygiene found that washing with water alone reduced bacteria on hands to about one-quarter of their prewash state. Washing with soap and water brought bacterial counts down to about 8% of where they were before washing. The bottom line is work with what you have. Something is better than nothing.

How long should you scrub your hands? At least 20 seconds, according to the CDC. As you’ve probably heard, that’s the same amount of time it takes to sing “Happy Birthday to You” twice. If you’re tired of that one, Twitter has some great suggestions for others.

Pay attention to places on your hands you might not always think about. Studies where people smother their hands with Glo Germ -- a product used to teach proper hand-washing that glows under a black light -- before they wash reveal the areas people tend to miss.
“Typically, spots people will miss will be the back of the hands, people will miss the lower palm. You might see some fluorescence around the fingernails and the nail bed area, where people typically don’t wash well,” Schaffner says.

And here’s something that’s good to know: Intention counts. Schaffner says his research has shown that the more people try to get better at hand-washing -- going for longer, scrubbing more thoroughly -- the less likely they are to spread contamination around a kitchen.

How often do you need to wash? A lot. The CDC says to wash your hands:
* Before, during, and after food prep
* Before eating
* Before and after tending to someone who’s sick
* Before and after treating a cut or other wound
* After going to the bathroom
* After changing diapers or helping a child in the bathroom
* After blowing your nose, coughing, or sneezing
* After touching an animal, or touching pet food or pet waste
* After handling pet food or pet treats
* After touching garbage

If you can’t wash, reach for some hand sanitizer. Lipid membrane viruses like coronaviruses are killed by alcohol-based hand sanitizer, Scott says. Just make sure it’s at least 62% alcohol.
Make sure to use enough so that it covers all the surfaces on your hands. Rub that on until your hands feel dry, which should take about 20 seconds.
If you still have some skin left on your hands after all that washing, try to keep it clean. Avoid touching contaminated surfaces. Use a clean paper towel to open bathroom doors. Disinfect dirty surfaces that you use every day, like the touchscreen on your phone and your computer keyboard.